A four-minute cinematic sets the scene for new Patch 5.4 raid

Blizzard has released a new cinematic trailer for World of Warcraft: Mists of Pandaria’s Siege of Orgrimmar raid coming in Patch 5.4.

“Siege of Orgrimmar is a 3-wing, 14-boss raid for max-level players, which will call you to take down Warchief Garrosh Hellscream at the head of a host of Azeroth’s finest,” explains Blizzard.

The update also adds new Proving Grounds and Connected Realms features, new zones and a list of other tweaks.

Here’s are the highlights of the update:

New Raid Mode: Flexible
– Raid with a group of friends and guild mates regardless of server, and with any group size from 10 to 25, and the difficulty will automatically adjust to provide an appropriately challenging experience.

New Feature: Connected Realms
– Lower population realms will be permanently and seamlessly “linked.” Players on the same Connected Realm will be able to trade, send and receive mail, join the same guilds, access a single Auction House, run the same Raids and Dungeons, and join other adventurers to complete quests.

PvP: Redesigned Arena System
– Arenas are no longer tied to specific Battlegroups, and players no longer need to create or join an Arena team to compete. Similar to the Rated Battleground system, players in a party of the appropriate size can queue.

The patch, which is available for testing on the Public Test Realms now, is detailed in full in a huge list of patch notes on the official site.

The mists have parted, and a new chapter in the World of Warcraft saga has begun. To help mark the occasion, PDP and SteelSeries have released several new products featuring original art from Mists of Pandaria. 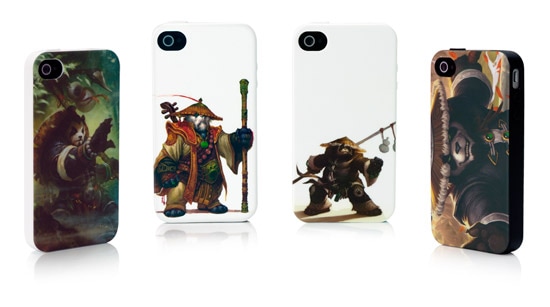 Gain 90 Damage Resistance and keep the Sha of Small Scratches and Dings from scuffing up your phone. These four new iPhone 4/4S cases from PDP are available for $29.99 each from the US online Blizzard Storeand PDP’s Blizzard storefront.

From left to right: SteelSeries QcK Pandaren Forest Edition, Monk Edition, and Crest Edition
Made of a high-quality cloth material with an optimized textured top, the SteelSeries QcK Pandaren Edition mousepads give you a smooth and consistent playing surface — whether you’re doing the delicate work of harvesting your crops at Halfhill or finishing off your foes with a Spinning Crane Kick. The specially designed nonslip rubber base prevents the pads from sliding, even if you’re resting it on a keg of fine pandaren ale. Pick them up for $14.99 each in the online Blizzard Store or the SteelSeries Shop.

Well friends it seems the reviews are starting to ripple in on Mists of Pandaria and a few are not so good. As with all expansions, there are players who love them and those who do not. The below article by Tamoor Hussain for CVG UK shows a few examples of what people are thinking but remember, out of over 10 million subscribers, these are only a few hundred comments.

Blizzard is in a tough position with World of Warcraft. Eight years after launching the MMO, as the market shifts towards free-to-play, it faces declining subscription numbers. It’s latest expansion, Mists of Pandaria, released earlier this week with markedly less fanfare than its predecessors.

Everybody loves progress, but no one likes change, as is evident when looking at the game’s user review average on Metacriticand reading the scathing testimonials from disgruntled fans.

Mists of Pandaria currently has a total of 313 ratings submitted by users. Of them 114 are categorised as positive, eight as mixed and 191 as negative. The majority of these negative reviews mentioned an over-simplification of the game, which – ironically – has driven the design of World of Warcraft from the outset and has been a major contributor in the MMO’s overwhelming success.

“Can’t believe I bought this game,” says SCougar91, who gave the game a rating of 0. “The whole idea of it should have turned me off from the get go, but loyalty to the series made me want to try it. The game has become a simplistic MMO that requires very little time and effort to play, which is not what I’m looking for. A dumbing down of a genre is what were seeing here.”

Others have criticised the expansion for using the “same recycled old engine”, apparently expecting Mists of Pandaria to provide a significant overhaul.

“Crashy servers, terrible graphics and still using the same textures from 2004 which look like if they came straight from a nintendo 64 game,” writes Renoxzor, who also gave the game a 0. “The best part is having to relearn all your characters with every new patch, did you take a break to have fun outside, bad news… your gear is now outdated and you need to farm it again… Did you have the best gear from hardmode bosses? Bad news, it’s garbage, the first green drops will be a major upgrade… The only thing this paid patch brings, pandas, tons of pandas… only the male panda is unique, sorta… the female only uses the female dwarf model with a panda head.”

Some have attacked Blizzard as a company, referencing other titles such as Diablo 3 to supplement criticisms of Mists of Pandaria.

“Blizzard became a greedy, **** company. Diablo 3 was a spit in the face, and this is the last straw. I wonder how many times people gonna eat the same recoloured, casual turd?”

Company hate aside, other users make some salient points, you just have to sift through the hate to find them: “Blizzard creates good games. But at some point in the last 5 yeas they stopped caring for the playerbase and instead are only thinking profit and money. MOP is not a bad expansion per say. But its just not good enough in terms of 10 million subscriber based game that should be delivering content regularly and with full focus on improving every aspect of the game.

“Blizzard is not doing that. For the last 5 years most of the money they got for WOW has gone into other games they are making and WOW is suffering because of it. It has been left to rot – just like 8 months of last raiding tier in Cata goes to show. They didn’t even have an active Live content crew on the game to keep the subscribers intrested.

“Instead they created Annual pass so ppl could SUB for MOP beta. Just bad all around. Im playing and leveling – but the bitterness of how BLizzard is doing their buisness these days is hard to swallow”

On the one hand it might be a bit unreasonable to expect Blizzard to pour significant resources into creating sweeping changes for an old game on the decline, but on the other World of Warcraft is much as service as it is a game, one that asks customers to continuously pay for access. From this perspective should we be expecting more from Blizzard and its expansions, even if they’ve probably moved on to bigger and better things?

For millennia, the continent of Pandaria has remained hidden, veiled from the rest of Azeroth behind a wall of impenetrable mists. Now the fog is lifting just as warships of the Horde and the Alliance clash off the coast of the lost continent. As heroes from both factions venture onto Pandaria’s shores to explore its ancient forests and cloud-ringed mountaintops, they soon make contact with the mysterious denizens that dwell there… heralding the start of a new era of discovery and conflict for all of Azeroth.

World of Warcraft®: Mists of Pandaria™ is now live and available in a store near you! You can also click hereto upgrade to the digital version directly through Blizzard. Featuring a new playable race (the pandaren), a new character class (the monk), and an exotic new continent to explore, the new expansion offers a huge variety of content for new and returning players.

Mists of Pandaria is available in a standard edition, Digital Deluxe edition, and retail-exclusive Collector’s Edition. For more information, read the press release, visit the Mists of Pandaria info page, or check out thegame guide to learn how to get started on your journey. Returning players might also want to read our recent pre-Mists of Pandaria survival guide to catch up on some of the major changes to classes, talents, and other game systems.

Once you’ve upgraded, level-85 characters will automatically receive a quest pointing the way to Pandaria upon logging into the game. Safe voyage, travelers — a new world awaits!

Hello everyone! As promised, a small review before I go to bed (school tomorrow). I have played to lvl 14 so far and I am greatly enjoying it and from what I can see on the chat channels, so is everyone else.

*Spoiler Alert*    Let me just start out by saying that the scenery is breathtaking and the art style and colors are beautiful to say the least. The music really pulls you in and you feel one with the world. Blizzard has as usual outdone themselves and the results really show. The story starts out with you training to be a successful monk. Fighting is very fun with many new moves like high swipe kicks and fast punches that daze enemies and deal damage to whom ever is near you. I’ve seen a lot of crazy new enemies so far like giant rabbits, crazy monkeys that like to jump on our head and smack you around and small magical tree folk. After much questing and enlightenment you and your friends are asked to speak to one of the elders.

Your sent on a hot air balloon up into the clouds and away from land. As you fly away you then realize that you were on a giant turtle. The whole island is actually the back of a moving gigantic turtle. After speaking to him, he tells you he is weak and dying and asks that you remove a big splinter he has stuck in his back. As you swing around you see that the splinter is actually  a huge Alliance airship that has crashed into the turtle’s side. It turns out the ship also had Horde prisoners on board as well.

After doing a few quests for each faction, your Panda friend Ji uses a Horde bomb to try and free the ship from the turtle’s side. The ship explodes and the turtle starts to lose alot of blood. Healers from both factions try frantically to stop the bleeding. At the same time they are attacked by creatures that have come up from the sea.

After the final battle, you go before your master and he asks you who you will be returning with, the Alliance or the Horde. This happens at about level 11-12.

I recommend the game to any WOW fan and any who might feel betrayed by blizzard. Give it a go, I’m sure you will enjoy it.