With Marvel’s Agents of S.H.I.E.L.D. tearing up the airwaves and a new Thor movie headed to theaters early next month, what better time to unleash a comic book-themed stylus for drawing on the iPad?

Disney Consumer Products and Marvel Entertainment have announced the launch of Marvel Creativity Studio Stylus and a companion app for the iPad, which allows kids to draw and even animate their favorite comic book superheroes.

Created by eKids, the app allows users to learn how to draw, color and animate a wide range of Marvel superheroes and villains from the company’s latest animated adventures: Avengers Assemble, The Ultimate Spider-Man and Hulk and the Agents of S.M.A.S.H.

“Leveraging the comic drawing history of the Marvel brand with the innovation that eKids brings to the table — or in this case, tablet — this product delivers a fun experience with endless play value,” said Josh Silverman, executive vice president of global franchise licensing and commercialization at Disney Consumer Products.

New York Film Academy’s Chris Swain explains the value of a degree and why designers should learn a bit of everything.

The barriers to entry in game development are falling almost across the board. Development tools are getting cheaper and easier to use. Online development communities can provide aspiring creators with guidance and feedback. And once a game is made, there are more platforms than ever through which it can find its way into the world. Even in the world of consoles, where keeping a carefully curated selection of offerings was once a key part of the business model, the gatekeepers are relaxing, touting self-publishing for independent developers.

In some ways, the industry has returned to its early years, when a developer working alone in the garage could create a blockbuster and become an overnight success story. Between the greater accessibility of tools and assistance, the greater potential to actually have their games succeed, and the romantic allure of living the indie developer dream, one might expect the people behind gaming degree programs in traditional scholastic environments to be a bit concerned. But Chris Swain, head of the New York Film Academy’s game design program and former director of the University of Southern California Games Institute, isn’t terribly worried.

“Historically there was no classical training for game designers. The training was just by doing, and there was no academic grounding for this before the early 2000s.”

“Sure there are plenty of people who will become game designers who never take a class,” Swain told GamesIndustry International, “but if you wanted to stack up the value of a game design education versus just working on your project? It’s all about depth of knowledge. It’s all about the mentorship and networking you get from being in the school, and all the relationships with fellow students. Given both those choices, I think there’s a lot of people who are going to want to go the formal route, and there are still going to be people who do the informal route, just like for any field.”

But even when would-be developers choose to go the academic route, Swain said the path has not always been clear. Art schools and computer science programs have been churning out artists and programmers for the game industry since before they had game-specific curriculum, but there hasn’t really been a comparable work-around for learning game design.

“Historically there was no classical training for game designers,” Swain said. “The training was just by doing, and there was no academic grounding for this before the early 2000s. You literally didn’t have a book like Game Design Workshop or Rules of Play.”

But even with those texts, teaching game design in an academic setting carries with it some unique difficulties. As Swain explained, his new students are coming in with widely varying technical abilities. Some may be skilled programmers already, while others could be relative neophytes to coding. With the NYFA design program, Swain addresses this in a couple ways. First, he puts an early emphasis on paper prototypes of games. Challenging students to create makeshift adaptations of classic board games allows him to provide feedback about basic principles of good design that could be applied to any project going forward.

Beyond that, every semester, NYFA also groups students into teams and puts them to work with a ringer, a professional programmer from the faculty. The ringer identifies each student’s technical prowess and steps in to help when a task is too far beyond their skill set.

“Ultimately the game designer’s job is to be the advocate for the player. This degree should teach you how to do that, and how to communicate with people in other disciplines to be a creative leader.”

“This system sort of alleviates that problem and lets them figure out how to express themselves and make a game even if they don’t have rock-solid programming skills at that time,” Swain said, adding, “It’s the difference between not being able to get anything done and being sure to get something done.”

While the system provides budding designers plenty of technical assistance, Swain doesn’t want them to rely on it. NYFA encourages students to take technical classes, and Swain said it’s helpful for designers to be a jack of all trades. Swain himself has a varied history. Going beyond his successful work as an educator (he served as thesis advisor for ThatGameCompany founder Jenova Chen), Swain has designed more than 150 games, and even run a business as founder and CEO of Cred.FM. He might not demand his students match that versatility, but Swain wants them to understand at least a little of every role on a development team.

“Ultimately the game designer’s job is to be the advocate for the player,” Swain said. “This degree should teach you how to do that, and how to communicate with people in other disciplines to be a creative leader. The practical side of it is you have to have some knowledge of the different disciplines in order to communicate…to those different people.”

If that’s the designer’s job, then Swain’s job is to produce designers who have that well-rounded and versatile skill set. After all, that’s one of the biggest reasons he sees for pursuing a classical education in design over bootstrapping oneself as an indie or going straight to work for an established development house.

“If someone worked in a company specializing in first-person shooters, the people in the company are probably experts at that particular genre,” Swain said. “But if they had to switch from that genre to another genre or be flexible in creating an original play mechanic, that would be a challenge for them. If you had a classical education in playable system design, you wouldn’t be in a niche like that. You would have an education about a holistic way of looking at playable systems, so you could fungibly fit in to all kinds of different projects and bring all that knowledge.” 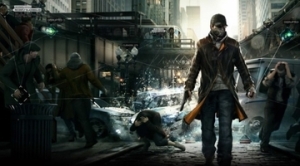 Ubisoft Motion Pictures, Sony Pictures Entertainment and New Regency are developing a motion picture based on the Watch Dogs game.

“Since both Sony and Ubisoft have movie and video game branches, this deal creates exceptional opportunities for us to merge the realms of the story-based cinematic experience with the interaction of the video game,” commented Jean-Julien Baronnet, chief executive officer of Ubisoft Motion Pictures.

“In addition, Sony Pictures and New Regency have deep production expertise and are letting us maintain a strong creative voice in the film’s development. Together, we’re confident we can deliver a movie that builds upon the excitement that the game is already generating.”

Hannah Minghella, president of Production for Columbia Pictures, added, “The themes and open gameplay of Watch Dogs lends itself perfectly to the big screen.

“The game has intense action and adventure, but the story focuses on information and the control of information, which we think will lead to an exciting thriller. It has tremendous potential as a motion picture and we’re thrilled to have the opportunity to work closely with Ubisoft’s internal creative team on the development of the project.”

The V&A museum has selected its first ever Game Designer in Residence, Sophia George of Swallowtail Games. After winning a BAFTA Ones to Watch Award in 2012 she released iOS title Tick Tock Toys.

“To be appointed as the first ever V&A Game Designer in Residence is a dream come true and an incredible recognition of everything I’ve worked so hard for – from Dare to be Digital, to winning a BAFTA, to releasing Tick Tock Toys,” said George.

“Computer games are an incredible artistic and creative medium that’s often overlooked, despite them blending elements of many traditional practices – including pure art, animation, character design, architectural design, music and much more. The V&A is leading the way by embracing computer games as a creative activity and by opening up its collection for interpretation by a game designer. It’s a huge challenge, but one I absolutely can’t wait to get started on.”

Her new role, which starts in October, will focus on research in the Britain 1500-1900 galleries at the museum, and around a third of her time will be spent sharing her work with the public. After 6 months she’ll work at Abertay University in Dundee creating games. George will receive help from a range of mentors, as well as studio space and some financial support.

“Sophia George is an outstanding choice for this innovative new opportunity for designers,” added director of V&A at Dundee Philip Long.

“We are delighted to be able offer her the combined experience of working within V&A, among the rich heritage of its art and design collections, and in Dundee where she will be supported by the expertise of Abertay’s digital design staff. The outcome is sure to be exciting!”

Developer Silicon Knights has closed its offices and sold its equipment and game assets, according to a report by Polygon. Silicon Knights chief financial officer Mike Mays told Polygon that a skeleton crew of employees remains and the studio is “definitely alive,” but local real estate agents confirmed that Silicon Knights’ offices are empty and available for lease.

“From my experience in July, I was laid off from Silicon Knights with a number of other people and I was saddened, you know, that we were going to go our separate ways,” he added. “And so I started reaching out to other people and seeing if they were interested in starting something brand new.”

Silicon Knights is on the hook for $4.45 million in damages in its case versus Epic Games, over the use of Unreal Engine 3 in the development of Too Human. Silicon Knights is still in the process of appealing the court ruling.

Epic Games filed legal motions to ensure that Silicon Knights formatted its computers before selling them to Precursor Games. According to court documents obtained by Polygon, the computers were wiped clean, preventing Silicon Knights’ game assets from making their way to Precursor. Precursor’s Shadow of the Eternals is being developed with Crytek’s CryEngine.

“Silicon Knights was selling off extra assets to laid off employees and we, along with others, purchased some of them,” Caporicci said to Polygon. “Like so many others who have been laid off in this difficult economy, we are simply trying to turn a tough situation into something positive.”